The city of Tianshui was for centuries an important town on the Silk Road, being the first stop in Gansu for travelers and merchants to various parts of northwestern China and beyond. It was many centuries before this, however, that the town found its fame, deemed as the birthplace of the legendary emperor Fuxi. Today throngs of people still flock to the Fuxi Temple, in the western section of the city, to commemorate him.aNySilk Road Adventure & Private Tours - Silk Road China Tours

Recent years have witnessed the rapid industrialisation of the city, that has rid it of much of its character, and expanded its size enormously. It is much due to these facts that people visiting Tianshui come mainly for the out of city attractions. Your choice of location in town probably should be influenced more by transport access to and from here, than for any other reason.aNySilk Road Adventure & Private Tours - Silk Road China Tours

The city is now rather strangely divided, by 20 kilometers, into two sections: the slightly more upmarket eastern section, Qincheng, and the uglier western section of Beidao. Qincheng is the main area of the city, has the best hotels, all of the local sights and is where you will arrive if you are travelling here by bus. Beidao, however, has two things going for it: it is where you will arrive if you are travelling to the city by train, and it is the best area for getting to Tianshui's best attraction by far, the Maijishan Grottoes.aNySilk Road Adventure & Private Tours - Silk Road China Tours

The Maji Mountain ("Wheat-stack Mountain") is the redeeming saviour for Tianshui, a beautifully serene area of wooded slopes, ancient Buddhist grottoes, large statues and many areas for pleasant hiking. The Mountain is situated some 30 kilometers on a winding road southeast from the town, and is among the four largest Buddhist cave complexes in China with an existing total of a stunning 194 grottoes.  aNySilk Road Adventure & Private Tours - Silk Road China Tours 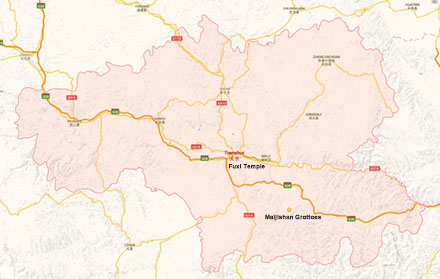