For tourists who are visiting the Gannan Tibetan region by going south from Gansu Province, Xiahe County is usually the first popular stop. The Xiahe River flows through many high mountains and deep valleys, and it was known of old as a route for armies in the area. Because of its special Tibetan Buddhist culture and strong ethnic traditions, the county is sometimes called "Little Tibet." Xiahe is between two mountains, and the Daxia River flows beside the town. Though the town isn't large, it has a wide main street that has Tibetan and Muslim restaurants and tourist shops lining both sides of the street. It is an interesting place where Tibetans, Muslims, Chinese and foreigners live together. The three highlights of the area are the Tibetan Buddhism, the natural scenery and the folk local color.jYkSilk Road Adventure & Private Tours - Silk Road China Tours

Labrang is the seat of the Jamyang, a line of reincarnated rinpoches (Living Buddhas) that rank third in importance after the Dalai and Panchen Lamas. The current Jamyang works for the government in Lanzhou.  jYkSilk Road Adventure & Private Tours - Silk Road China Tours

Xiahe County is located in the northwest region of the Gannan Tibetan Autonomous Prefecture, and it is adjacent to Qinghai Province. It is 280 kilometers away from the capital of Gansu Province and about 4 hours away from it by car. The county has one town and about 14 villages. The county sits at a high elevation, averaging between 2900 and 3100 meters. The highest elevation is 4636 meters, and the lowest elevation is 2160 meters. The county has a total area of 6,273 square kilometers. It has a population of about 130,000 people. There are 14 ethnic minorities including Tibetans, Hui, and Sala, and the total minority population is about 77,300 people of whom 78% are Tibetans.  jYkSilk Road Adventure & Private Tours - Silk Road China Tours

Airport: 72 km from the city 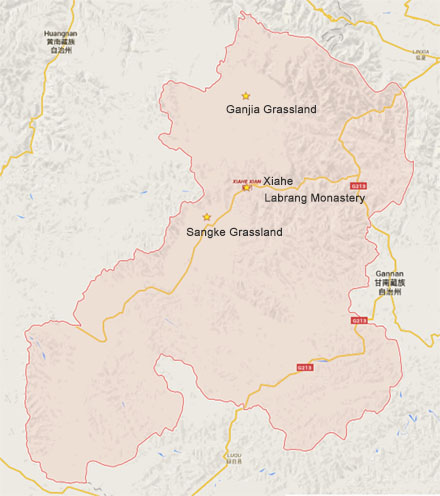