Leitai Tomb of Han Dynasty is located in the Leitai park on the Mid Beiguan Rd., Wuwei city, Gansu province. It is a large brick-chambered tomb of the late Eastern Han Dynasty, and was discovered by local farmers under an old locust tree in 1969. Now, it is a main tourist attraction in Wuwei city on Silk Road. VVESilk Road Adventure & Private Tours - Silk Road China Tours
The tomb is famed for the Bronze Galloping Horse, known in Chinese as ‘Ma Ta Fei Yan’, the horse is depicted in a full gallop held on just one foot upon the back of a bird in flight. The statuette is about 45 centimeters long and 35 centimeters high, weighing 7 kilograms, it has been adopted as a logo for Chinese tourism. Visitors can view the horse in the Gansu Provincial History Museum.VVESilk Road Adventure & Private Tours - Silk Road China Tours

Leitai is a place for sacrificing the Thunder god; it is famed with the Temple of the Thunder God which was built on the terrace in mid Ming dynasty. According to the record on the horse chest of the horse tomb figure unearthed, it was the tomb of "Shou Zhang Ye Zhang Zhang Jun" (General Zhang of Zhang Ye) built between 186 to 219 A.D. Of all the unearthed pieces, the bronze galloping horse is of the great artistic level. The bronze Horse on a Swallow, which is also named “horse with hoof on a swallow”, namely Ma Ta Fei Yan in Chinese, is the logo of Wuwei City. Surprisingly, the modeling of horse surpassed the flying swallow with its three hooves as well as its head and tail rose in the air, and it is still well balanced. It showed the great talent of the ancient Chinese people with its great artistic level.VVESilk Road Adventure & Private Tours - Silk Road China Tours 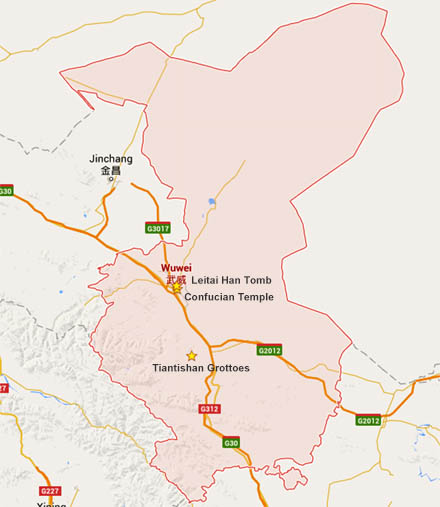