The First Bridge Over The Yellow River

Before Zhongshan Bridge was built there were many floating bridges over the Yellow River, but only one existed for a relatively long period. This bridge was called Zhen Yuan Floating Bridge and was made up of more than 20 ships, tied up by ropes and chains. It floated on the river in order to help people pass over, but it was neither solid nor safe enough. Almost every year floods destroyed the bridge or even killed people. Problem also arose in the winter, when ice would build up on the river, so the bridge would have to undergo the costly process of being disassembled and then re-built in the spring. Used for over 500 years, the Zhen Yuan Floating Bridges was finally retired in 1909, when an iron bridge was built. This new bridge is what we call the First Bridge over the Yellow River.j2BSilk Road Adventure & Private Tours - Silk Road China Tours

In the year 1907, under the proposal of local officers in Lanzhou and Gansu and the help of a Germany businessman, the Qing Government began to build this first iron bridge over the upper reaches of the Yellow River. All materials, even the rivets, were transported from Germany to China using ships, trains, carts and any other means possible. The bridge was completed in two years, and named 'Lanzhou Iron Bridge over the Yellow River'. In 1942, to commemorate Dr. Sun Yat-sen, the bridge was re-named Zhongshan Bridge (Zhongshan is the Chinese name of Dr. Sun Yat-sen).j2BSilk Road Adventure & Private Tours - Silk Road China Tours

The First Bridge Over The Yellow River 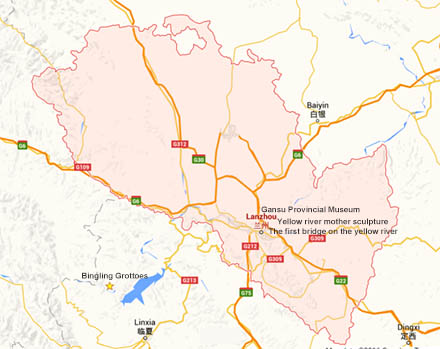