The Flaming Mountains, lying in the middle of the Turban Depression and running from east to west, are one of the branch ranges of the Tianshan Mountains and were formed in the organic movements of the Himalayas fifty million years ago. In millions of years, the natural weathering and the numerous folded belts caused by the crystal movements have formed the undulating lie and the crisscross gullies and ravines of the Flaming Mountains. Under the blazing sun, the red rock glows and hot air curls up like smoke as though it were on fire, hence its name. The mountains are 98 kilometers long and 9 kilometers wide. The highest peak is 40 kilometers east of the city of Turban and 831.7 meters above sea level. Here is the hottest place in our country with the summer air temperature reaching 47℃, and it was said that at the top of the mountain the air temperature is as high as 80℃.aaHSilk Road Adventure & Private Tours - Silk Road China Tours

Among the local ethnic groups spreads a fairy tale: there was a evil dragon that ate children. Later, the dragon was killed by a hero. Before killed, the dragon flew around the mountains that were dyed red by blood from the wound of the dragon. Tourists who come to the Flaming Mountains are surprised to see that the valley called the Grape Valley is covered with a large belt of fresh green plants and is right at the foot of the Flaming Mountains.aaHSilk Road Adventure & Private Tours - Silk Road China Tours

The Journey to the West is a famous story written in the 1500s by a writer named Wu Chengen during the Ming Dynasty. It is now a children's fable, and in China it is shown in cartoons. A Buddhist monk on his way to India runs into a wall of flame. The story is based on an account of a monk who went to India in the 7th century and passed by the red sandstone ridge that is about 9 or 10 kilometers wide. There are about 8 canyons that go through it. One of them is called Tuyugou Valley or Toyoq Valley and another is Grape Valley that has become a theme park. Turpan and northern Xinjiang is an interesting area for scenery and touring, and the Flaming Mountains is one of the sites you'll see in a trip to Turpan.aaHSilk Road Adventure & Private Tours - Silk Road China Tours

The Flaming Mountains are hot. In the summer, the ground surface temperature can reach 80 degrees Celsius or 175 degrees Farhenheit. In the summer, the waves of desert heat and mirages dance on the red ridge that is furrowed by parallel gullies. So it does look like a wall of flames especially in the afternoons in a red sky. That is quite interesting to see. You can see the big ridge from anywhere, and if you are driving along Road G312 that follows the Flaming Mountains at the base going east and west, you can ask your driver to stop at some quiet place where you can have a walk and take photographs in some solitude.aaHSilk Road Adventure & Private Tours - Silk Road China Tours

There is a Flaming Mountain museum with a big thermometer, and a lot of Chinese tour groups go there. There are camel rides and kids excited about the Journey to the West and the characters like the Monkey King. The fee for the museum is about 40 RMB or about 6 USD. There are other tourist places and tourist traps as well. Grape Valley is only about 11 kilometers or 7 miles from Turpan by road. A lot of tour groups go there for a place to rest in an oasis-like area and to eat a lot of freshly picked fruit. There are 220 hectares of grapes (more than 500 acres of grapes) and 200 acres of other fruits. Plus lots of raisins of different varieties and freshly made wine and ethnic handicrafts such as Chinese Persian Uighur rugs.aaHSilk Road Adventure & Private Tours - Silk Road China Tours 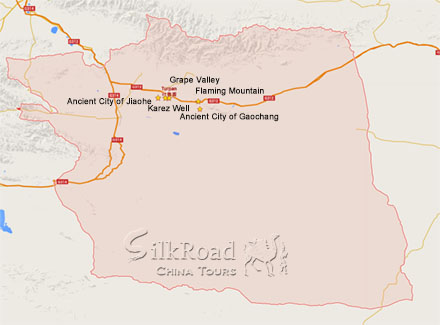