The Pinewoods at Machangtan grassland have enjoyed fame among visitors. There are 9 stripes of pinewoods growing parallel on the slope of mountain, which look like army men that waiting for general’s review. Each July, lots of herdsmen will gather around here for the grassland carnival of once a year. Horse racing, wrestling, archery, dancing and singing make here a sea of joy.nrzSilk Road Adventure & Private Tours - Silk Road China Tours

The Kangle Monastery at the Dacaotan village was originally built in Kangxi period of the Qing dynasty, which has history over 300 years. The name of the Kangle grassland is in fact from the monastery.nrzSilk Road Adventure & Private Tours - Silk Road China Tours

Shiwo is the place that the Chinese 4th army battled bitterly with Kuomintang’s army in 1937 and a vital decision made on the meeting here which finally saved lives of thousands of red army soldiers. A monument erected at the site for the memory of this important meeting.nrzSilk Road Adventure & Private Tours - Silk Road China Tours 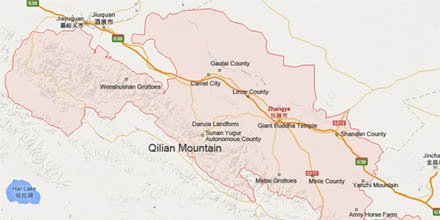